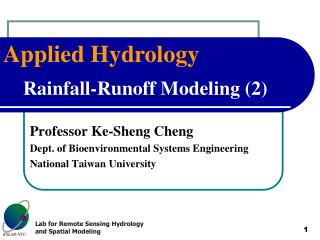 Uncertainty in rainfall-runoff simulations An introduction and review of different techniques - . m. shafii, dept. of

Rainfall-Runoff-Inundation Forecasting in the Chaophraya River - . ( icharm, as of oct 23). purpose: understanding and

Rainfall - . presented by: group- d. introduction. this presentation explains about the variability of rainfall in

Runoff - . hydrographs and the scs curve number method. runoff vs. streamflow. runoff is the result of a precipitation

Modelling experiments with conceptual rainfall-runoff models under non-stationary conditions - . csiro water for a

Runoff Processes - . reading: applied hydrology sections 5.6 to 5.8 and chapter 6 for tuesday of next week. runoff.