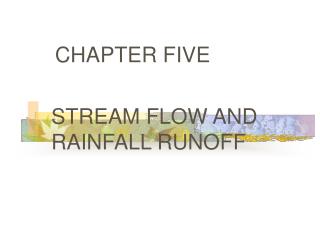 CHAPTER FIVE STREAM FLOW AND RAINFALL RUNOFF. INTRODUCTION. Rainfall has an effect on stream flow and hydraulics tends to measure the relationship between rainfall and stream flow. The aim of measuring stream flow is mainly in establishing a stage discharge relationship.

Chapter 7 COMPRESSIBLE FLOW - . in this chapter on compressible flow, one new variable enters, the density, and one extra

Runoff generation and its representation in land surface models - Dennis p. lettenmaier department of civil and