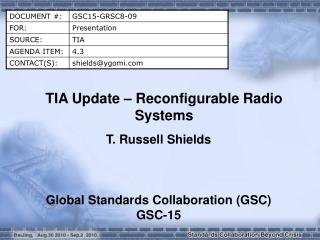 Technician License Class - . chapter 1 welcome to amateur radio. what is amateur radio?. amateur (or ham) radio is a

Radio Receivers - . al penney vo1no. role of the receiver. the antenna must capture the radio wave. the desired frequency

RADIO ALTIMETERS PRESENTATION - . menu. two radio altimeters are installed in the a320. they measure the aircraft height

WRITING FOR RADIO - . radio in india. experiments began in 1915. broadcasting began in india with the formation of a

RaPiD The Reconfigurable Pipelined Datapath - . presented and slides created by shannon koh based on material from the