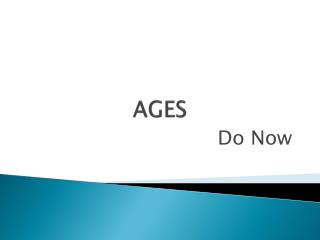 AGES. Do Now. How to do a Do Now. 2 pts per day Complete in 3-5 full sentences, unless otherwise noted Date each entry Use the entire page Write on only one side. DO NOW. 2/24/2014 *List and define the 4 factors of production. Relate these factors to opening up an Soft AGES - . by clay tattersall and paul podlas. for our project we had chosen to take a look at married couples ages, for

Middle Ages - . ch 13-14. section 1. break up of western roman empire. for hundreds of years, europe is in shambles.

Middle Ages - . middle ages. byzantine. thick small basilica or round format. round no outside inside. hagia sophia.

Middle Ages - . period in western european history between the 400s and the 1500s, or between the collapse of the roman