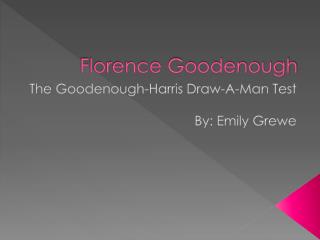 Florence Goodenough. The Goodenough-Harris Draw-A-Man Test By: Emily Grewe. Early Life and Education. Born in Honesdale, PA on August 6, 1886 Home schooled to the equivalent of a high school dipoloma Received a B.S. from Columbia University in 1920 Florence - . history of florence. florence arose as a colony of the etrurian town fiesole in around 200 a.c around,

Florence Nightingale - . her life. florence nightingale. what work might this person be doing?. how can we tell that this

Florence, Italy - . lorenzo de’ medici (by mitchell widner ). where is it?. getting to florence. fly into florence’s

Florence, Italy - . spring 2006 tony hanf. where is florence?. florence is the capital city of the italian region of