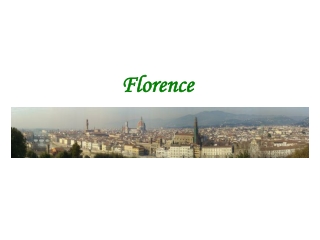 Florence. History of Florence. Florence arose as a colony of the Etrurian town Fiesole in around 200 a.C around, and subsequently it became the Roman Florentia. Beginning from the IV century, the city passed through periods of Byzantine domination, Ostrogoth, Lombard and Frank. Florence Nightingale - . her life. florence nightingale. what work might this person be doing?. how can we tell that this

Florence, Italy - . lorenzo de’ medici (by mitchell widner ). where is it?. getting to florence. fly into florence’s

Florence, Italy - . spring 2006 tony hanf. where is florence?. florence is the capital city of the italian region of

Florence Nightingale - . florence nightingale was born on 12 may 1820. she was named after the city in which she was