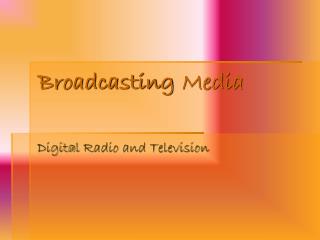 Broadcasting - . the fcc says the term “broadcasting” means transmissions intended for reception by the general

Broadcasting - . knock knock jokes. the &quot;broadcast&quot; block allows us to control which block is played

Broadcasting - . chap 20. introduction. use of broadcasting to know server address on the local subnet: resource

Broadcasting - . many networks support the notion of sending a message from one host to all other hosts on the network. a

What Is The Career Involved In Media Broadcasting? - Media broadcasting include television, film (including animation and

CA2 007 INTRODUCTION TO NEW MEDIA AND BROADCASTING - . episode 1 prologue. brought to you by a. yossapol “tone”