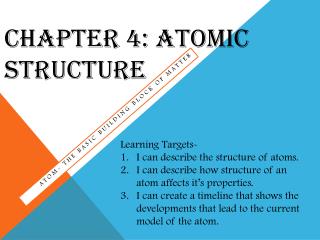 Chapter 4: Atomic Structure. Atom- The basic building block of matter. Learning Targets- I can describe the structure of atoms. I can describe how structure of an atom affects it’s properties. I can create a timeline that shows the developments that lead to the current model of the atom. Chapter 4 Atomic Structure - . anything in black letters = write it in your notes (‘knowts’). 4.1 – defining the