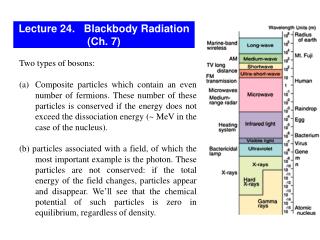 Lecture 24. Blackbody Radiation (Ch. 7). Two types of bosons: Composite particles which contain an even number of fermions. These number of these particles is conserved if the energy does not exceed the dissociation energy (~ MeV in the case of the nucleus).