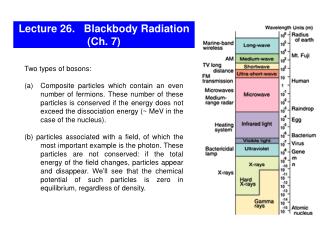 Lecture 26. Blackbody Radiation (Ch. 7). Two types of bosons: Composite particles which contain an even number of fermions. These number of these particles is conserved if the energy does not exceed the dissociation energy (~ MeV in the case of the nucleus). Planck's quantum theory is compatible with the experimental data related to which of the following? - . blackbody

Radiation in a Radioactive World - . nuclear physics and engineering by: douglas osborn. is this what you think when i

The lecture - . hygienic description of physical, chemical and biological factor of production environment. the plan.