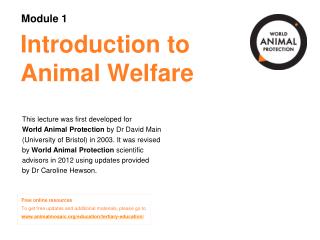 Agricultural Animal Welfare - Does agriculture improve the welfare of animals…? …or cause unnecessary suffering?

FSBI Animal Handling and Well-being Guidelines - . what is animal well-being. an industry issue a consumer issue a

Laboratory Animal Handling Technique - Objective. to comply with the animal welfare ordinance and avoid mishandling of

Animal Welfare vs. Animal Rights - . animal welfare. it is a human responsibility that encompasses all aspects of animal

Animal Rights - . do animals deserve to be given the same respect and dignity that we afford the members of our own