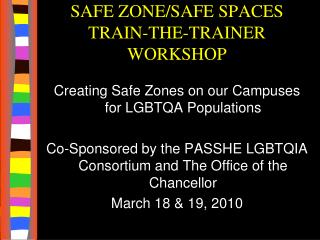 SAFE ZONE/SAFE SPACES TRAIN-THE-TRAINER WORKSHOP. Creating Safe Zones on our Campuses for LGBTQA Populations Co-Sponsored by the PASSHE LGBTQIA Consortium and The Office of the Chancellor March 18 & 19, 2010. I. Welcome and Introductions. Swift Water - . swiftwater. one of the most dynamic and dangerous areas of special operations difficult to train for

Safe Loading of Vehicle and the Use of Securing Devices - . course objectives:- on completion of training, students will

Safe Chemical Handling - . session objectives. you will be able to: recognize hazards posed by materials know how to

2013 FALL WORKSHOP - Mission strengthening all students for life through participation in excellent, fair, safe, and

The Safe Use of Fluoroscopy - . a required inservice for people who work with or near fluoroscopy. the fda says . . .