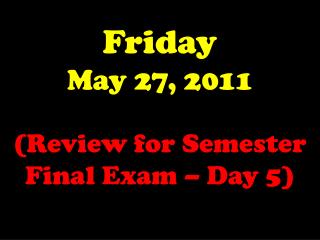 Friday May 27, 2011. (Review for Semester Final Exam – Day 5). The Launch Pad Friday, 5/27/11. No Launch Pad Today. Announcements. Please check your yearly average in this class. If you are below 70 for the year, please come and see me ASAP! There are only two more grades remaining!. Black Friday - . is it worth it? videth delude. “black friday”. coined in 1960s to mark the kickoff to the christmas

Welcome to Good Friday Service - . we are glad you chose to spend it with us and him. because of you. v1. jesus i lift up

Monday 10/14/13 - . goal: to discuss and describe life of the plains indians. warm up: work with partners on your

2011 CAPF Professional Workshop - . professional sign-offs. divider: option 2 this may be used as a main section divider.