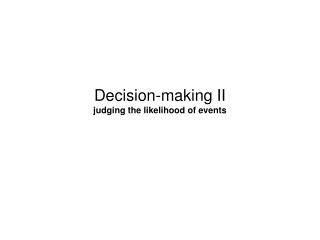 Decision-making II judging the likelihood of events. Heuristics and Biases. Tversky & Kahneman propose that people often do not follow rules of probability Instead, decision making may be based on heuristics Lower cognitive load but may lead to systematic errors and biases Guessing the Likelihood of Events - . 1. suppose an equal number of people are born on each of 365 days of each year. how

Making the Decision - A comprehensive prevention, response, and support plan from the university task force on sexual

THE NATURE OF DECISION MAKING - . decision making the act of choosing one alternative from among a set of alternatives.

The Rules of Decision Making - . marginal analysis . opportunity costs. because our resources are scarce every decision

The Process of Decision Making - Your questions from reading?. rationalityproblems with being rationalstrategies to

Part II THE SYSTEM AND EARLY DECISION MAKING - . chapter 4 the police. outline. what is the history of police-juvenile