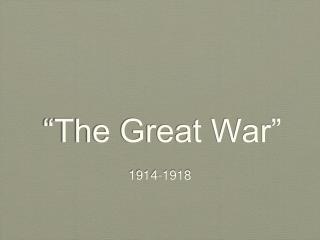 Great War - . this slide show will advance on the mouse click. the photos were collected from various sources found on

Take a glimpse @ 101+ Great Books - . college board’s 101 great books for college-bound students this list has been

The Second Great Awakening - . by: alexander schulze-makuch. the second great awakening- a wave of religious enthusiasm .

Great Smog of London 1952 - . by matt palmieri. causes. smog is an atmospheric pollutant combined with smoke, fog and

Towards Wildlife Friendly Wind Power A Focus on the Great Lakes - Organized by: u.s. fish and wildlife service u.s.

Welcome to Westwood - . …..new teacher induction program. “schools are not made great by great teacher performances.

St Andrew’s Parish Church 11 September 2011 - . we welcome you this morning. how great is our god, how great is his