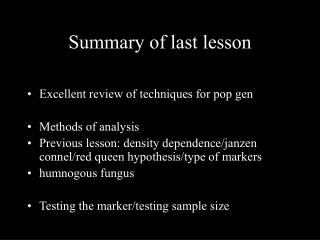 Summary of Last Lecture - . the market the average consumer in the market tapping the opportunities. who serves the bop

SUMMARY OF LAST CLASS - Concepts you are responsible for. battery: elements (including offensive contact, kind of

Last Lesson: - . upshot: we can show a system of equations has no solutions by computing the reduced groebner basis. .

Last lesson - . know what the turning effect of a force is know that the moment of a force depends on force and the