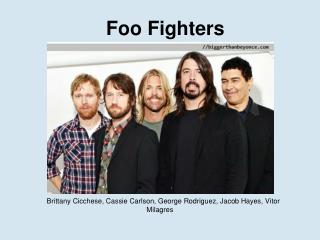 Music Video 1 Analysis Foo Fighters – Dear Rosemary. - The foo fighters are a rock band that have been in existence for

Fire fighters - . by peter and ashley. i feel that fire fighters take care of people so that we can be safe. firemen are

Fire fighters - . by c harlie and ella. contents. fire fighters help us in the community because pages 3 – 5 fire

Fire Fighters - . by : samuel. a fireman saves people and puts out fires. tasks : respond to fire alarms and other calls

1. What famous band was the lead singer of Foo Fighters, Dave Grohl, previously in? - . 2. who was the american music

Fire Fighters Visit - . january 2013. reception. we started the beginning of this term learning about `people who help