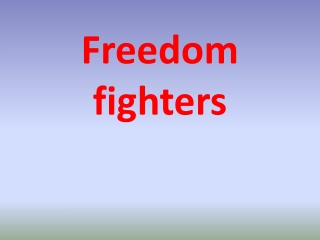 The Rebels as Victors - . six major reasons for victory. 1. the americans were fighting for their own soil, homes and

Freedom of Expression - . selena mariscal gabriel estrada per.5. freedom of expression- freedom of speech is the freedom

ROMAN GLADIATORS - . what is a gladiator?. gladiator: one who wields a sword professional fighters who fought for the

The Bill of Rights - . the first 10 amendments to the u. s. constitution. the first a mendment: freedom of expresssion.

The Matrix Lads - . in the near future, computer hacker neo is contacted by underground freedom fighters. who explain

Freedom Riders - . dondree woods mr. glasson. the freedom fighters were a group who wanted segregation to end. their

Freedom of Expression in Mongolia - . munkhsaikhan o. bayasgalan n. the table of contents. freedom of expression under

HISTORIOGRAPHY of the American Revolution - . so what?. history is “a set of lies agreed upon by historians.”

Frederick Douglass - . chapter 4. freedom is …. freedom is anything that releases us from restraint. different types of

Freedom By Paul McCartney This is my right, a right given by God - To live a free life, to live in freedom we talkin'