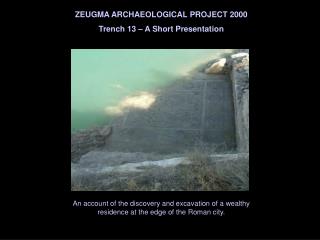 ZEUGMA ARCHAEOLOGICAL PROJECT 2000 Trench 13 – A Short Presentation. An account of the discovery and excavation of a wealthy residence at the edge of the Roman city. The Birecik dam after construction, as the reservoir is gradually filled. WIDE AREA SURVEY, JUNE – JULY 2000. Layout of the Short Story - . 4. short story : a prose narrative that is shorter than a novel &amp; generally