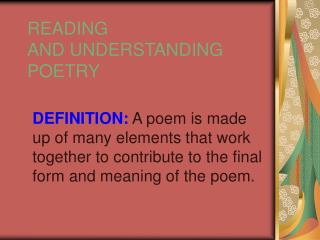 READING AND UNDERSTANDING POETRY. DEFINITION: A poem is made up of many elements that work together to contribute to the final form and meaning of the poem. ELEMENTS OF A POEM. BR_MAIN1 - . before reading. global reading. detailed reading. after reading. 1. background information. 2. about the

Close Reading - . ms ness. general tips. note the number of marks that the question is worth. this gives you an

Grasping God’s Word - . old testament—poetry chapter 20. poetry in the bible. “poetry is the language of the

A Brief History of British Poetry - . overview. a summary of key movements in british poetry: shakespeare the

reading &amp; understanding code - . experts are better at code comprehension because they focus on higher level

Teaching &amp; Performing Poetry - Professional development activity for “enhancing the interface between the