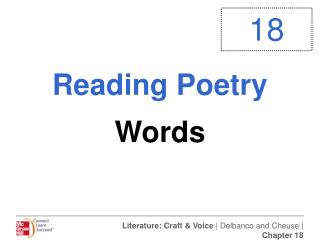 18. Reading Poetry. Words. “Poetry: the best words in the best order.” ─ Samuel Taylor Coleridge. Diction. Indeed, since poetry is, by nature, the most economic form of literature, poets struggle to find exactly the right word and to place it in exactly the right order. Reading Poetry - 8/11/2012. 2. read it. read it more than once, if possiblegood poetry rewards multiple readings.

Reading Poetry - . the experience of words. what is poetry?. poetry is a type of rhythmic, compressed language that uses

Reading Poetry - . ms. logan english i. the rules. look for punctuation that tells you where the sentence begins and

Reading Poetry - . strategies for understanding poems. speaker. the speaker is the imaginary voice you hear when you

Poetry Reading Strategy - Poetry presentation guide for this project you will be researching, interpreting, and

Extra Credit Poetry Reading! - . for extra credit, i asked the class to bring a favorite poem to class with a typed

Reading Poetry “ Happiness Epidemic” - . 1. meet the poem. read it all the way through (including the title) and get

READING AND UNDERSTANDING POETRY - . definition: a poem is made up of many elements that work together to contribute to

Reading and Writing about Poetry - . enc 1102 brown 7 /15/2012. what is poetry?. undefinable unmistakable is shakespeare