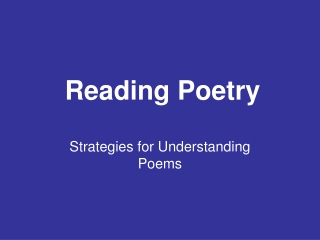 Poetry - . spring has sprung, the grass has riz, i wonder where the birdies is?. aims. to exemplify the role of poetry in

Poetry - . ajarn steve. poetry. poetry is difficult to define. poems use words to paint a picture in your head. a good

rhyme - Learning intentions to recall and understand how to go about reading a poetry text. to be aware of the range of

The Power of Poetry - . maggie hsin-ying huang 12/18/2012. roadmap. why should i teach poetry? benefits difficulties how

Reading, writing, Communicating - . grade 6, unit 4 poetry. essential questions. why is it possible to have different

Understanding Poetry - . norwood public schools. what is poetry?. in poetry the sound and meaning of words are combined

INTRODUCTION TO POETRY - . reading a poem. a poem differs from most prose in that it is to be read slowly, carefully, and