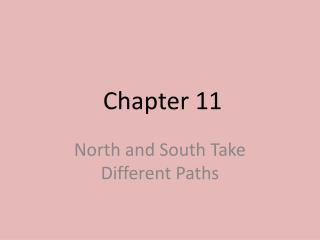 Chapter 11. North and South Take Different Paths. Warm up (Briefly answer all 3 questions…we will discuss as a class.). Questions: 1. Before stores and factories, how did people get materials that they needed? 2. What daily household items would be the most difficult to make/build?

Chapter 11 - . mountain building. i) where mountains form. mountain belts 1) most mountains are associated with

Chapter 11 - . writing features. 11.1 types of features pages 290-295. feature story has all the journalistic elements of

Chapter 11 - . conditions:. the net force on an object needs to be directly proportional to the objects vector

Chapter 11 - . islm and asad. islm – model that shows the impact a change of an economic variable has on the