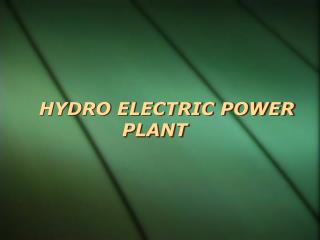 HYDRO ELECTRIC POWER PLANT . INTRODUCTION. The cheapest source which is to generating power is water. Hydro-electric power plant main aim was to generate power in flowing water. The energy which is from hydel plant is utilized to drive turbine. Gasoline/Electric Hybrid Vehicle Update ‘06 - . what is a hybrid vehicle?. a vehicle using both a gasoline engine and

THERMAL POLLUTION - . what  is  thermal pollution ? . increase in the

A Presentation On - Hydro-electric power plant. a presentation on. by :- rakesh kumar assistant professor electrical