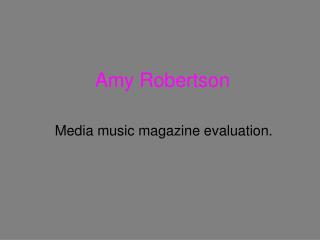 Amy Robertson. Media music magazine evaluation. Foundation portfolio evaluation. Now that I have finally completed all of my three tasks, including my music magazine, contents page, and the double page spread, I can now evaluate on a whole, taking the following into consideration:. Oscar Robertson - . by: cole schmidt. background information. born and raised in indianapolis he went to the university

Robertson National School - . w e lcom e to our o pen af t erno o n. the purpose of this visit. to help you and your

Cortney Nicole Robertson - . about me family friends hobbies favorite websites wall of the future resources. about