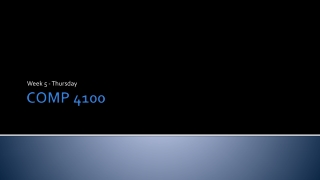 Week 5 - Thursday. COMP 4100. Project 2. Assignment 3. Grammar. Grammar. The basic unit of written English is the sentence . A sentence is composed of a subject and a predicate . The subject is the noun or noun phrase doing the action.