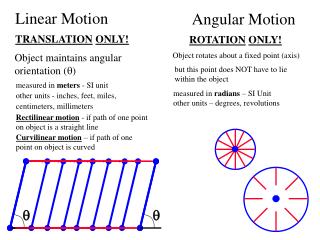 q. q. Linear Motion. Angular Motion. TRANSLATION ONLY!. ROTATION ONLY!. Object rotates about a fixed point (axis). Object maintains angular orientation ( q ). but this point does NOT have to lie within the object. measured in meters - SI unit other units - inches, feet, miles, 10-2 Distance, Displacement, and Acceleration for Linear Motion - . by: elder calderon. displacement and velocity. as