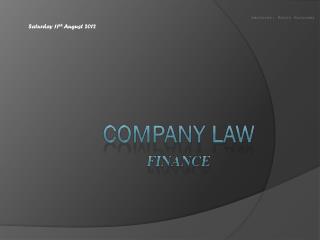 Saturday 11 th August 2012. Company law FINANCE. Transferable form of property, carrying rights and obligations, by which the interest of a member of a company limited by shares is measured (in accordance with s33 of Companies Act 2006) Home Finance Company - In-home financing is a sort of dealer financing in which a firm broadens clients an advance,

Federal Campaign Finance Law - . federal election commission. established by congress in 1974, the fec in an independent

Law, finance, and growth - . questions. how to measure country’s financial development? how is it related to legal