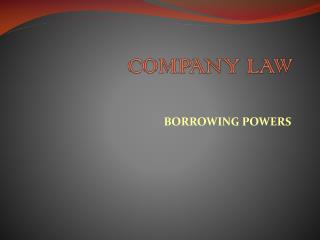 COMPANY LAW. BORROWING POWERS. Capital is necessary for the establishment and development of a business and borrowing is one of the most important source of the capital, but unfortunately there is no express provision in the Companies Act as to the borrowing powers of the company .