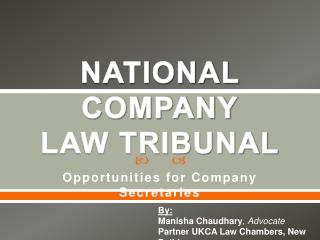 American National Insurance Company and YOU! - . “a partnership for the future”. ratings products easy to do business

AN OVERVIEW OF NATIONAL COMPANY LAW TRIBUNAL - . consolidation of corporate jurisdiction in india. presented by: manisha

ARTICLE VII Executive Department - . section 1. the executive power shall be vested in the president of the philippines.