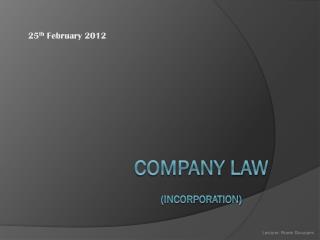 25 th February 2012. COMPANY LAW (INCORPORATION). The kind of legal entity or corporate body which is brought into being by the registration procedures laid down by the Companies Act 2006 Business Law by I. Sridhar Part – A Company Law - . learning objective to study the procedure of incorporation of a

Chapter Two: Formation of a Limited Liability Company - . the chapter focuses on the followings: 1.the conditions of

Company Incorporation Singapore - In todayu2019s generation of hi-tech world, many of you might wish to start your

Company Incorporation | CompanyRegistrationIndia.co.in - Learn all about how to register a company name; for company

Company Formation Singapore - We are one of the leading company incorporation service provider in singapore. we can