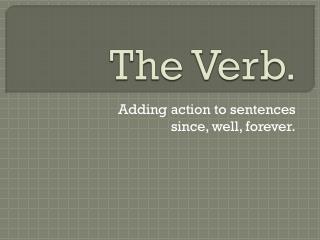 The Verb. Adding action to sentences since, well, forever. Definition. Recognize a verb when you see one. Verbs are a necessary component of all sentences. Verbs serve two functions: putting static objects into motion OR clarifying objects in meaningful ways (aka ACTION or LINKING). THE VERB - . all the verbs in hebrew are based on a combination of roots and patterns. root שורש. a root is a

The Verb - . action and linking. verbs are a necessary component of all  sentences . verbs have two important functions:

The MA verb - . ma- prefix is used to indicate sensation and state of being. buhay—live, remain alive busog—be full

The Verb Party - . i. proper format of verbs. verbs are properly “named” with their first two principle parts: amo ,

The Verb Ser - . chapter 1- part ii grammar. learning targets. i can identify the conjugation of the verb ser . i can use

The -Um Verb - . an actor focus verb. the -um verb. indicates that the actor or doer of the action is the topic/focus of

The verb venir - . you use venir to say that someone is coming to a place or an event. ¿a qué hora vienes al

The “BE” Verb - . be is a verb?. it certainly is, but… it doesn’t show action like most verbs it tells

The verb IR - . ir means “to go” ir is usually followed by the preposition a (to) ir is an irregular verb refer to

The verb “ir” - . i can use the verb “ir” to say where someone is going. señora jorgensen tjms. why is the verb