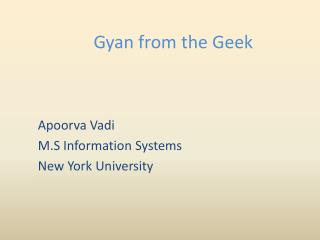 Gyan from the Geek. Apoorva Vadi M.S Information Systems New York University. What is computer Science?. Lets talk about M&M? The Math Monster. BAD MATH !!!!. Algorithms…. What are those things?. An algorithm…is like a recipe. Problem solving as an analogy to cooking: 1. Inputs The Ethical Geek - Stats. more than 90% of all corporate information is electronic.north

From Totally Geek to Totally Chic ! - . helping celebrities understand what not to wear !. select a celebrity from the

Geek Squad - We are dedicated to giving you proper service no matter where are you. you can contact us

enface-geek - Enfacegeek is a leading website that is devoted to offering well researched information. it gives solution

Geek Helpline - Dial geeks helpline number if you are facing any issue related to your pc, smartphone, tv, car