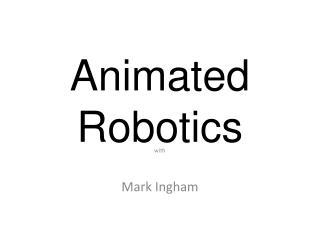 Animated Robotics. with Mark Ingham. Robots of Brixton by Kibwe Tavares. A really short synopsis of Frankenstein, or The Modern Prometheus would be: Animated - . serendipity: the faculty of making fortunate discoveries by accident. r. a. brown 2003 u. concepci Ó

animated - Unit 3a. animated. - (adjective) full of life; lively. students were very animated the friday after pssas were

Animated Logos - Wiserweb.co.uk is a top website for web design and seo. it provides marketing services. all information

Animated Film - . the lion king. animated (or children’s) films. animated films are ones in which individual drawings

Animated Movies - In early years animated movies were made through the traditional animation process, which is called

Animated Text - . by agnieszka naskret. sylwia grzeszczak-small things. it will be as before, let us stop hurrying let us

Get Animated! - . explore the history of animation from the earliest cave drawing to simple computer animation. includes