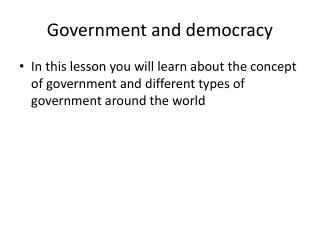 PowerPoint 1: Government and Democracy - . what is government?. the role of government is to make decisions and enforce

Government What is democracy? - Https://www.youtube.com/watch?v=ouy-dvsu4by dictatorship in north korea:

Citizenship and Government in a Democracy - . “if liberty and equality, as is thought by some, are chiefly to be found

Local government and local democracy in the Netherlands - . the netherlands: presentation. population:16,6

E-Government, E-Democracy and E-Services for Communities - . judith molka-danielsen may 03,

E-electioneering and E-democracy (Government 2.0) in Australia - . studies of online citizen consultation and social