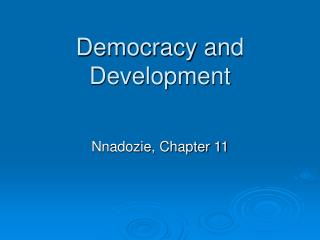 Democracy, “Good Governance” and (Sustainable) Development - The challenge of matching governing form to

Direct Democracy and Development in Tarnaka - New instruments of concertation to deal with our problems . ward sabha

Democracy, Human Rights, and Human Development - . paul bacon sils spring 2010. what we have done so far. we studied two

Democracy, “Good Governance” and (Sustainable) Development - The challenge of matching governing form to

Development of Democracy in Athens - . how did these men aid in bringing about democracy in athens?. important terms to