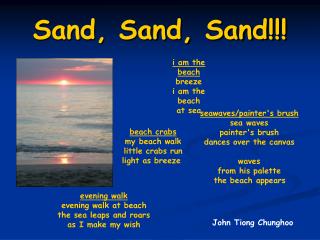 Sand Dollar - . by: mark trombley. it is an animal that lives slightly buried in the sand in shallow coastal waters. what

Sand Dunes in Dilkon Caused By Droughts - . a project by: j.r. ,chad, jalen, and l uke. climate change issues. we are

The Mole: A Measurement of Matter - . sand activity is it practical to count each grain of sand? how else might you

Manufactured or Natural Sand - A natural sand however is made naturally over thousands of years by wind, rain and