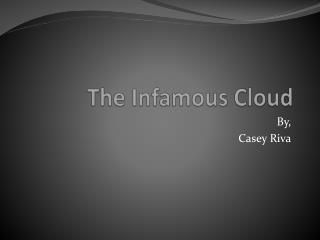 The Infamous Cloud. By, Casey Riva. The Craze Of The Cloud. Why is Cloud Computing becoming so popular? People are always on the move, this drives to a demand for more portable access to files and software from anywhere. Infamous Accidents - . prior accidents and what have we learned michelle brackin, assistant executive director. why?.

Infamous Accidents - . prior accidents and what have we learned michelle brackin, assistant executive director. why?. the

Infamous Software Failures - . cs a470. (don’t let these happen to you!). what is good software?. depends on your point

Today you will learn about the infamous… - . art viewing guide. how to do an…. find in caption. physical: where it is

The Infamous Russian Battle in The Great Northern War and Russia - . by: anthony sica . when was

The Cloud... - The cloud. everything you need to know about icloud , dropbox and google drive to use these tools

The cloud - . matthias liffers emerging technologies specialist. by the way…. muh-tee-us. or to make it easier. @mpfl.

The Cloud - . or cloud computing… or the end of executive headaches…. imagine…. you have your own startup company

The Cloud - Rob keizer robert@keizer.ca systems administrator. the cloud. what is it? why is it popular? it