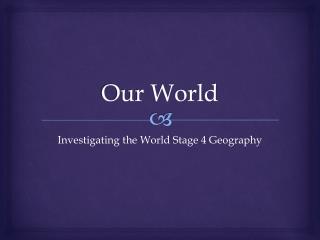 Our World. Investigating the World Stage 4 Geography . Our World. Recognise continents using different map projections. Use latitude to describe the global pattern of climate including the spatial and seasonal change in insolation Use longitude to explain world time zones. Our World - . everything on earth can be grouped as: living non-living living things can be put into 2 groups: plants and

Our World - . 6 form. 1 .name the river london is situated on. general knowledge. 2 .what was the tower of london in the

OUR WORLD… OUR FUTURE - . what is global warming?. carbon dioxide and other gases warm the surface of the planet

Our World, Our Legacy - . the child, society &amp; the world: unpublished speeches and writings; chapter iv-1:

Mapping our world - . chapter 2. section 2.1 latitude and longitude. cartography is the science of mapmaking, where

Mapping Our World - . chapter 2. your experience with maps. describe the various ways in which you have used maps. why is

Our Rockin’ World - . jeri gannon-jacobsen. by:. types of rocks. igneous. this kind of rock is made from molten

Mapping Our World - . we will investigate several methods scientists use to map our world. the goal of creating any map

Our Toxic World - . our toxic world. toxic overload we are living in a polluted world multiple environmental toxins total

Modeling Our World - . 9. unit 9a. functions: the building blocks of mathematical models.

Our Unequal World - . the north/south divide. inequality. our world is a very unequal place. there are huge social

Our Changing World - . a series of presentations to the university of west georgia community august, september, october