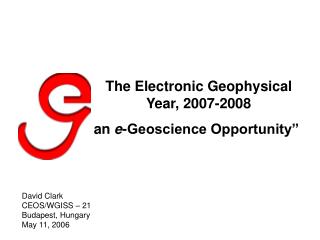 Welcome to Computing in Geoscience! - . a brief introduction to computing at the university of leicester. andrew myers .

5 Year Strategy Steel Team Brad Beuc January 24 th , 2007 - . it is better to be prepared for an opportunity and not have

The eGY Opportunity - . daniel.baker@lasp.colorado.edu e gy_team members. vision of the e gy. geoscience in this century

International Heliophysical Year (IHY) 2007: Overview - . what is ihy? ● an international program to expand the famous

Geoscience Professionalism and Ethics - . university of calgary department of geoscience – march 17, 2009. unlock your