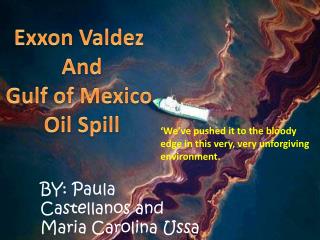 Exxon Valdez Oil Spill Response - . oil spill response 25 years after the exxon valdez and in the wake of deepwater

EXXON VALDEZ - . oil spill in alaska. tanker, which was built at the shipyard * in san diego in 1986. it was designed to

BP Oil Spill Solution - (1888pressrelease) bp oil spill solution. gulf of mexico or in any other place. we propose to