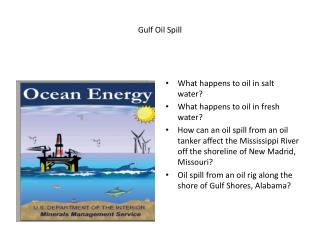 DISASTER RISK REDUCTION - . a primer of knowledge that can multiply and spill over for the benefit of millions. walter

SS7H2d Explain U.S. presence and interest in Southwest Asia; include the Persian Gulf conflict and invasions of Afghani

The Vietnam War - . swbat: homework: finish the organizer. do now: begin reading about the gulf of tonkin incident. .

TO EVACUATE OR NOT TO EVACUATE FOR HURRICANES - . a primer of knowledge that can multiply and spill over for the benefit

Georgia - . who am i ?. i explored the east and west coast of florida and was given credit for discovering the gulf

Lecture #3: Human Cognition (Preece 3 &amp; Norman 3-5) - What did you learn last week? to impress your friends,

Semester 2 Final Exam Review - . 1. how does the gulf stream affect climate?. it cools the eastern coast of the united

Iraq War: A Timeline - . clearing up the misconceptions. 1991 the first gulf war. the gulf is a region near the persian