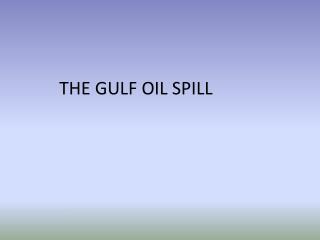 The Gulf Oil Spill: - . our future in offshore drilling. oil spills. definition: release of crude oil or petroleum into

The Gulf Oil Spill - . by: alex dominguez. the oil spill has affected people in many ways. like oil has covered the

Oil Spill In the Gulf - . by: avery turner. what happened?. the oil rig exploded in the gulf of mexico, killing 11

Oil spill in the gulf - . by: logan h ollinsworth. where was the oil spill?.

Modeling the Oil Spill in the Gulf - . donna reinhart, barbara simon-waters and beth marass. what do we know about the

OIL Spill - . by: michael oliver . what happened . oil spills happen when people make mistakes or are careless and cause