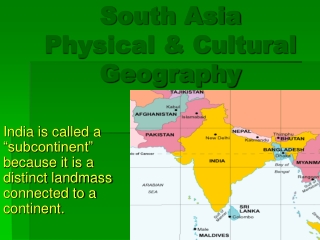 South Asia Physical & Cultural Geography. India is called a “subcontinent” because it is a distinct landmass connected to a continent. A Land of Great Variety. Subcontinent used to be part of Africa Deccan Plateau lies between eastern and western ghats (prevent rainy winds) Cultural Development and Physical Geography - . india. india is located on the continent of asia between pakistan (west),

The Geography Of South Asia - . mrs. kelly traina. the size of south asia. the himalayas. the natural barrier that

Human Geography of South Asia: A Region of Contrasts - . both south asia’s rich and ancient history, and its religious

Physical Map of South Asia - . what best explains how the himalaya mountains were formed and shaped in south asia?.

Physical Geography of SW Asia - . what are the major physical features of southwest asia, and where are they located?