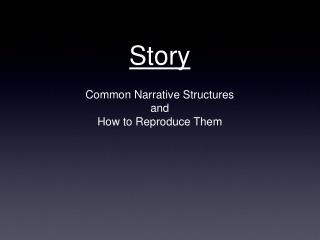 Story. Common Narrative Structures and How to Reproduce Them. Foundations. first theory of narrative formulated by Aristotle in The Poetics his theory is still the basis of all mainstream storytelling came up with “ Beginning, Middle, End ”. (What does this really mean?). God’s Story, our story - . the story of the bible and our place within it. aims . to provide space to look at the bible

Story - . this chapter describes the various ways to tell a story and the importance of considering from whose

STORY - . of. antonio. antonio was 11, he worked in the gold mines of peru. mines. work more!. antonio was sick of

Story - . salma is from india, and got married when she was 10 years. she said that within a year of her marriage she was

STORY - Hi. story. who says so?. who should be our next president?. hillary clinton barack obama (2:00). it is all about

A Story, A Story - . focus question what would you be willing to give up in order to have all of the stories in the

story - . bill jerkins worked in a big office in the city. and generally he used to go to the barbers during

Story - Based in pigmentopia drozel is born an albino gecko. drozel finds a way to steal colours from areas. pigmentopia

Story - . unit 5 notes. what is the classical paradigm?. most popular type of narrative structure based on a conflict

Story - . start. hey, i’m bugso billigins. i live with my parents in bricksburg where everything extraordinary happens.