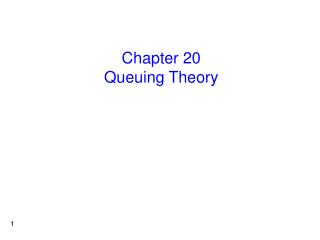 Chapter 20 Queuing Theory. Description. Each of us has spent a great deal of time waiting in lines. In this chapter, we develop mathematical models for waiting lines, or queues. 8.1 Some Queuing Terminology. Waiting Lines - . also known as queuing theory. have you ever been to the grocery store and had to wait in line? or maybe

CS640: Introduction to Computer Networks - . aditya akella lecture 20 - queuing and basics of qos. the road ahead.

Structure of a Waiting Line System - . queuing theory is the study of waiting lines four characteristics of a queuing