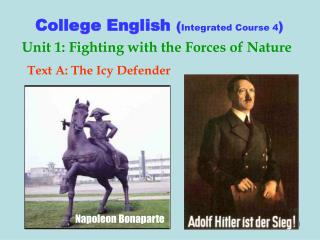 College English ( Integrated Course 4 ). Unit 1: Fighting with the Forces of Nature. Text A: The Icy Defender. Napoleon Bonaparte. I. Pre-Reading: Proverbs and Quotations. Understand the following proverbs and quotations: 1. Nature, to be commanded, must be obeyed. ----Francis Bacon College English - . 教师：刘卓 janetliuzhuo@yahoo.com.cn. listening. lead in listen to the passage and fill in the

College English 1 - . unit 9 health. outline. text a conversation: is it an emergency? text b eastern and western