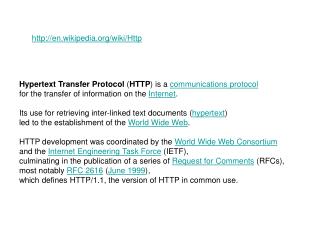 http://en.wikipedia.org/wiki/Http Hypertext Transfer Protocol ( HTTP ) is a communications protocol for the transfer of information on the Internet . Its use for retrieving inter-linked text documents ( hypertext ) led to the establishment of the World Wide Web .

en.wikipedia/wiki/Remote_administration_tool - Tip: opening a single file in an email, or from the internet, can

en.wikipedia/wiki/The_Holocaust - Hello dear readers, i made this to show you the faces that are affected by our