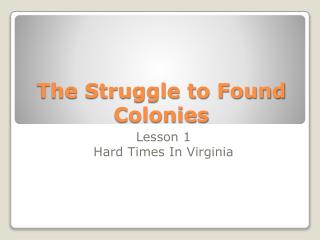 The Struggle to Found Colonies

The Struggle to Found Colonies. Lesson 1 Hard Times In Virginia. England’s rulers watched as their rival Spain established vast new colonies in the Americas. Queen Elizabeth I sent colonists to a place called Roanoke Island. Like the Spanish they hoped to find gold in the Americas.

The Struggle to Found Colonies

13 English Colonies - . warm up: compare and contrast the reasons for settlement of jamestown and plymouth. map activity.

13 colonies - . r.j. charnjit lyndia. introduction of the 13 colonies. the colonies were founded because people wanted to

Cold War and Post World War II Political and Economic Issues - . what was the experience of africans in british colonies

After the Convention The Struggle for Ratification, Rights, and Unwritten Powers - . central authority. liberty and

Struggle for North America - . colonization . in the 1600’s the french, english, dutch and the swedish joined spain in

Chapter 5 The Struggle to Found Colonies - . lesson 1-hard times in virginia. as spain settled colonies in the new world,

After the Convention The Struggle for Ratification, Rights, and Unwritten Powers - . central authority. liberty and

2.3 The 13 English Colonies - . main idea the 13 colonies will be founded for a variety of economic and religious

13 Colonies - . new england, middle, southern. 13 colonies. along which ocean are these colonies located? what natural

Colonies - . dr g.d.brindle www.schoolhistory.co.uk. one of the major reasons for bad relations amongst the nations of

The Thirteen Colonies - . the creation of: the new england colonies the middle colonies the southern colonies. the new