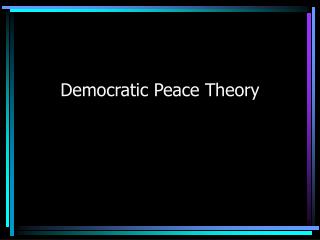 THE DEMOCRATIC PEACE THEORY - . aim and objectives: to examine the connection between democracy and war. examine how

Peace, Perfect Peace - . ephesians 2:14-18. peace, perfect peace. we do not live in a peaceful world there is constant